Conversations With Kiddos About Alcohol

When I began my journey to stop drinking alcohol in 2014, my children were nine (almost 10) and seven years old.

Today, they are 18 and 16, and my son, who has just begun his freshman year of college, surprised me a couple of weeks ago with his newest tattoo — my sobriety date in Roman numerals on his bicep.

Our first real conversation about alcohol, and my drinking, specifically, took place in late 2016, shortly before I marked two consecutive years alcohol-free. I wrote about it several weeks later for Huffington Post. And, while some of the language I used in that piece — alcoholism, alcoholic, relapse — has become old and sleepy based on the incredible work that has been and continues to be done to eliminate stigmatizing labels and encourage curiosity and exploration when it comes to our relationships with alcohol, the message remains the same: conversations with our kids about alcohol are critical.

The conversations I have with my teens are different today than they were eight years ago.

When I was drinking, neither of them ever said anything about it. Perhaps they didn’t realize what was going on. I know for sure I was very good at hiding it, drinking mostly after they had gone to bed … until the last several months anyway. Today they tell me they really don’t remember me drunk.

I am now extremely vulnerable and honest with my kids — perhaps to a fault. As a drinker, I did not stand in my truth. I was incapable of modeling a healthy relationship with alcohol. I never could have had these conversations so I feel the more I can share, the better.

I want my kids to be able to make informed decisions. That’s not an option I had at their ages. Unhealthy alcohol consumption was modeled for me, and I was told very strictly not to drink until I was of legal age.

For me, my journey to find freedom from alcohol is not only part of becoming the best version of myself but it is also an invitation for me to disrupt a long and strong generational narrative in my family.

Alcohol use disorder exists on both sides of my family. But, when I was growing up, no one talked about it. My grandfather died by suicide, still a drinker. My grandmother, his wife, stopped drinking with AA. She was sober my whole life. But, no one told me until I was well into my own journey and she had been gone for years. I wish I could talk with her now.

My dad saved a girl in our hometown at a party one night. She was lying in a bathtub drowning in her own vomit. That was supposed to be enough to scare us. The message was: Do as I say not as I do.

But, as my friend Annie Grace says in her How To Talk To Your Kids About Alcohol course (I highly recommend it!), kids will do what we do, not what we say. And, it’s our job as parents to show, don’t tell. But also … tell everything.

Annie has also just published a book, Buzz to Buzzkill: How Alcohol and Dopamine Hack Your Brain, that helps kids understand what really happens to the brain when a person consumes alcohol.

Recently, a few of us parents at This Naked Mind sat down with Head Coach Scott Pinyard to share some of the conversations we’ve had with our kiddos of all ages in the latest episode of This Naked Mind Podcast — click the image below to listen! 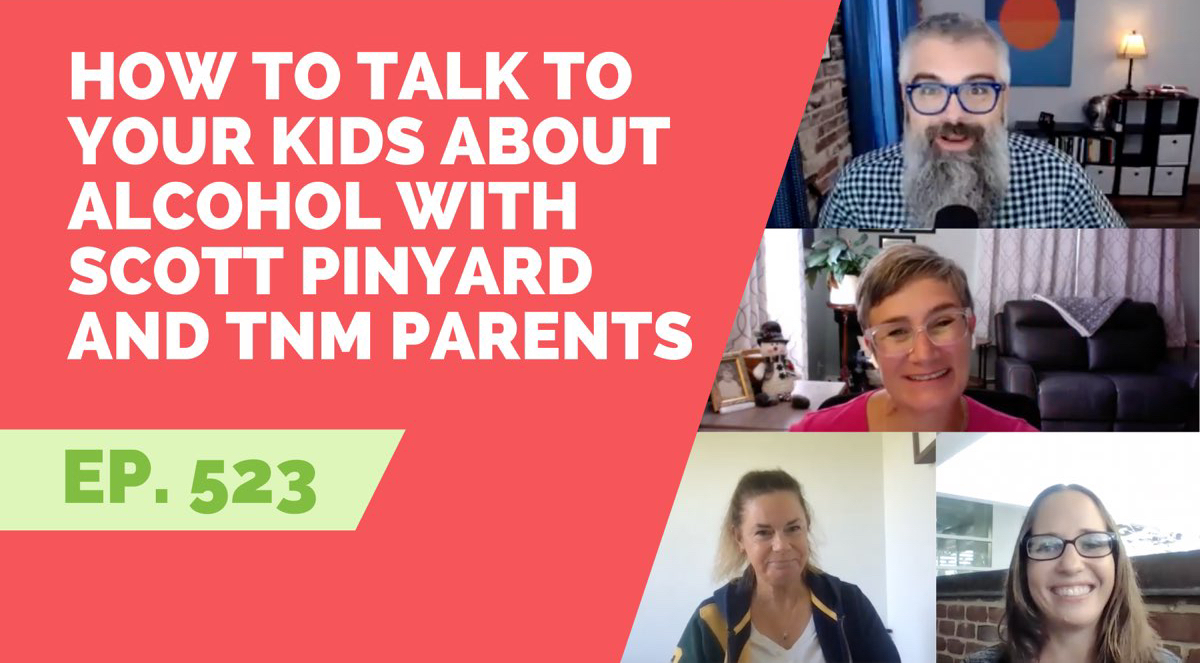 get the blog right in your inbox

Want to join the discussion?
Feel free to contribute!

This site uses cookies. By continuing to browse the site, you are agreeing to our use of cookies.

We may request cookies to be set on your device. We use cookies to let us know when you visit our websites, how you interact with us, to enrich your user experience, and to customize your relationship with our website.

Click on the different category headings to find out more. You can also change some of your preferences. Note that blocking some types of cookies may impact your experience on our websites and the services we are able to offer.

These cookies are strictly necessary to provide you with services available through our website and to use some of its features.

Because these cookies are strictly necessary to deliver the website, you cannot refuse them without impacting how our site functions. You can block or delete them by changing your browser settings and force blocking all cookies on this website.

We also use different external services like Google Webfonts, Google Maps and external Video providers. Since these providers may collect personal data like your IP address we allow you to block them here. Please be aware that this might heavily reduce the functionality and appearance of our site. Changes will take effect once you reload the page.